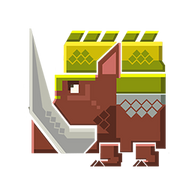 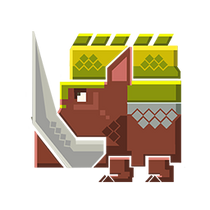 The Thorny Boar is one of the creatures in Pixark.

Wild thorny boars are not as terrible as they look. They are herbivores, but brave in battle.

They resemble a pig with horns on each side of the mouth.

It is not aggressive, however do not attack it without being prepared as it can put a very powerful bleed upon you or your mount that will drain your health quite quickly. It also has a long charge and is fairly quick when in pursuit. Can be found in the Mountain Forest.

When tamed it can gather both meat and hide, as well as Wood and Tree Seeds, it will not, however, gather berries. It also cannot be healed with meat or berries, but does use berries as food. Right click is a charge attack that will leave a powerful bleed on any target it hits. Although they have very low hit points compared to other creatures, it does seem to heal up after a fight fairly quickly. There is a C attack as well however it appears to be the same as the primary attack.

So far this seems to be the only creature that can harvest magic trees for bark.