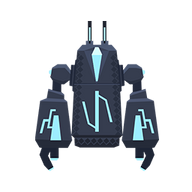 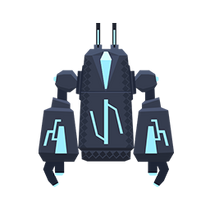 The Smallpatrol is a creature in PixARK Skyward DLC

Can Be captured with the Alien Research Platform to produce Alien Equipment Piece or Alien Building Piece.

Often found flying between biomes, these small, dark blue creatures are highly aggressive and will chase after any player who gets to close. Players who are on lower level mounts, or taming on the cloud floor should take caution, as their small size can make them hard to see.

Smallpatrols are only tameable by shooting it with a Cobalt Tranquilizer Dart from a Longneck Rifle. They will only eat Cobalt Battery to tame, and will continue to only eat them after they are tamed. Due to this it is advised to keep it in a PixBlock state when not in use. A good way to tame a Small Patrol is to lure it either to a nearby biome or to the cloud floor, and kite it around while shooting it.

For passive tames, there is a long wait between the first and second feedings as the creature eats, after which it follows the feeding intervals listed. These feeding intervals are estimates - the actual interval will vary per-creature based on random chance.
Error: No taming-data for "Smallpatrol" found. If the current page is not a creature-page, write the wanted creature as first parameter. Use only the common name, found on the creature's dossier.

Small, fast, and agile, these creatures should be avoided until the player had obtained a good flyer capable of taking and delivering a moderate amount of damage.

Combat flyers such as Wyverns, Gryphons, and Argentavis should easily be able to defeat any Smallpatrol. It is possible to kill Smallpatrols with pteranodons CSpin attack, to begin harvesting Alien Pieces at early levels, however with health pools able to go above 3000, stamina can prove to be an issue. Rifles are another viable method to quickly kill Smallpatrols.