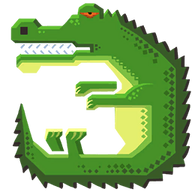 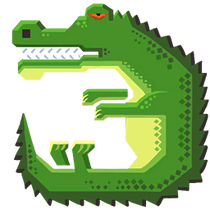 The Sarco is one of the creatures in Pixark.

Sarcos always lurk in the swamp. Never try to escape them by swimming. They are even faster in water.

Tamed Sarcos can dive into the ocean and even kill Megalodon. It's a good partner when you explore the dangerous sea world.

Living in the muddy swamp, the Sarco subspecies has evolved their agility and body flexibility to better suit their competitive environment. They can hunt down prey, especially those that are agile with their "Deadly Tumble", a more efficient means to kill their prey (It's a lunging attack that does very high damage).

Sarcos have an aggressive nature and will attack you on sight.

Sarcos are practically the carno of the sea. Sarcos are related to modern day crocodilians.