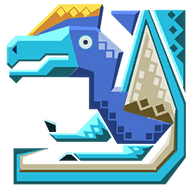 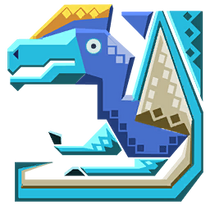 The Pteranodon is one of the creatures in Pixark.

Wild Pteranodons are very cautious creatures. They are hard to catch, as they often fly away at the first sign of danger.

Pteranodons make for swift flying mounts, and are good at both reconnaissance and combat. They are vulnerable, however, and tire easily.

The Grassland subspecies of the Pteranodon can deal an extra spin attack with more stamina consumption. 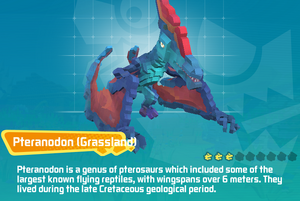 The Pteranodon has a subspecies in the Grasslands biome that is distinguished by it's much darker blue body, pink wings/crest and a much thinner overall design.

Passive unless eggs are disturbed, will fly away if attacked. If eggs are disturbed (including eggs laid by tame Pteranodons!) they will attack by diving at the target, making them hard to deal with if no ranged weapon or flying Dino is available.

You can tame the Pteranodon by knocking it out and feeding it meat. The torpidity does drop at a decent rate, so make sure to have Narcoberries or Sleepy Potions on hand if taming a high level Pteranodon.

Be careful of killing Pteras by accident when trying to tame one, they have very little health. Use a Bow with Sleepy Arrows and always aim for the body, headshot damage is very likely to kill a Ptera, especially with Crossbows.

The Pteranodon is one of the fastest and easiest-to-get flyers in Pixark but lacks the durability and combat-effectiveness of higher-level mounts. They have low stamina when freshly tamed and are easily killed so a wise player maintains a stable of several birds.

The Pteranodon's speed makes it excellent for quickly getting back to your death site should there be a tame still alive nearby in a dangerous area. Having at least 2 spare Pteranodons or other fast mounts can mean the difference between saving a tame and losing one in dire situations.

The Ptera is a valueable creature for scouting ahead in hazardous biomes at a safe altitude and exploring the map. A regular Ptera is better suited for travel due to it's spin attack, which costs half the stamina that it's Grassland subspecies uses when doing the spin.

Pteras can be used to attack and kite creatures into traps, beware of losing your mount though to stronger creatures or running out of Stamina, Pteranodons are not very durable in combat. You can also work together with another player in your tribe by picking them up and holding them in the sky so they can safely shoot at a creature.

Pteranodons can carry the following creatures and Players.

Due to the Pteranodon's fragile body, a Sleepy Dart shot from a Longneck Rifle will usually kill the Pteranodon. Survivors are recommended to use a Bow or Slingshot.

The Grassland subspecies's spin attack costs twice as much Stamina and is able to hit the same targets twice within about half a second during the beginning of the spin.

When going into water the creature gets stuck in the air!