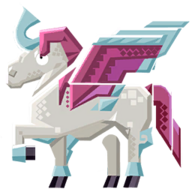 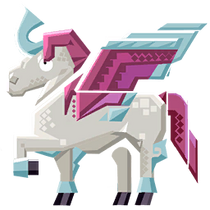 The Pegasus is one of the creatures in Pixark.

It is said that the pegasus is actually a unicorn. Wild Pegasus like to fly in the sky and rarely touch land. They are neutral but will fight back once it's attacked.

The horn of the pegasus gives off a bright light, which makes it a favorite of adventurers.

The Pegasus is passive and will fly away when hit.

A Pegasus l is a Knockout method. To knock it unconscious you will need Magic Sleepy Arrows using either a Bow or Crossbow.

They flee when hit, but just so happen to lay eggs (oddly enough) so a good strategy would be to pick up an egg near the Pegasus you wish to tame, with either decent armor or a pen nearby.

Does not require a saddle to ride. The horn on its head produces light.