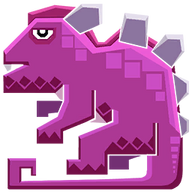 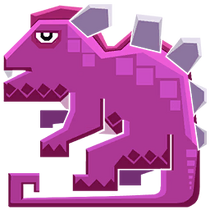 The Pachy is one of the first creature a player will encounter in Pixark.

Pachys seem to fear no animal or man. Approach them and feed them berries to gain their trust.

Pachys seem to be the dinosaur most friendly to humans. A tamed Pachy is a novice adventurer's best friend. Its powerful charging ability makes it able to stun most animals.

A small dinosaur with a rounded dome-shaped head that it uses to attack when aggravated. It has multiple dull horns over it's spine along with some sharp horns on it's face.

Will remain passive against the player unless attacked. In the Novice Grassland, it will de-aggro against you after a short amount of time.

Pachys will remain passive unless attacked by the player. Once attacked they will continue fighting back until the player breaks line of sight for long enough. Their main form of attack is a headbutt and they can be surprisingly quick and persistent.

Early on in game, the Pachy can hold a fair amount of weight, while also being able to be ridden, it can be a very helpful mount from it's Right Click move allowing it to charge forward- being able to outrun majority of Novice Grassland enemies.