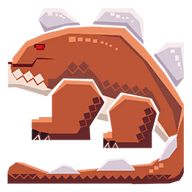 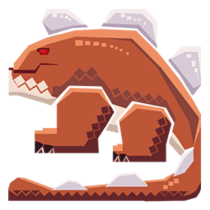 The Megarock Dragon is one of the creatures in Pixark.

Megarock Dragons are mostly found in deep caves that are under the Doom Lands biome. Despite the fact that they may seem intimidating for the player, they are very slow and don't represent an important threat if the player remains aware of its surrounding.

The mouth of a Megarock Dragon can destroy almost any mineral. People usually tame them for plundering underground mines. Their power in combat isn't to be scoffed at, either.

Red eyes, had a lava rock glowing at its head.

Megarock Dragons are aggressive and will attempt to bite your character and use earth magic attacks against it.

Great to gather ores, they can "eat" a whole mountain in minutes! It can dig any kind of cube from dirt to gold!, But can't gather magic stones only destroys them.