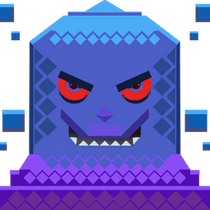 The Large Sea Slime (Ruins) is one of the creatures in Pixark.

It is very aggressive and will destroy your tames and you. Use wind magic and use steel bone, magician or lava armour. It has three different forms (the large sea slime, two medium sea slime, and four small sea slimes bring good tanes like soul reapers and elemental spirits or anything that can fit in this arena.

The Large Sea Slime can not be tamed.