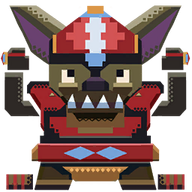 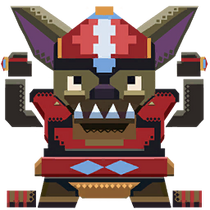 The Goblin King is one of the creatures in Pixark.

Goblin Kings are commonly found in the caverns of a Golden Realm. They can usually be found standing on blocks but sometimes are partially embedded in the block, with only their hat and ears showing. They will sometimes drop from the roof.

Goblin Kings are diminutive humanoid creatues with large, upward pointing ears. They are easily distinguished from Goblins by their red and white hat.

Goblin Kings, like their lesser brethren, are cowardly creatures that prefer to ambush unwary adventures by dropping from the roof of a cavern. Goblins and Goblin Kings drop a loot bag instead of a loot chest.

The Goblin King can not be tamed.

Goblin Kings are a great way to Farm Experience, Along with farming Privilege Certificates as they are almost a 100% drop chance.

They can be trapped against walls using a flyer and Melee'd to death. They can be picked up by an Argentavis then killed with the primary attack.