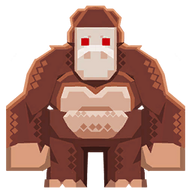 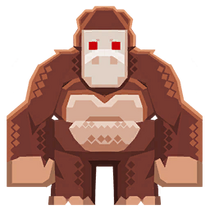 The Gigantopithecus is one of the creatures in Pixark.

Gigantopithecus is a creature that likes to wander around. You can often find them on tall mountains. Usually, they are not aggressive, but if you get too close, you may provoke them.

A tamed Gigantopithecus is both strong and flexible. It can even throw its rider over low walls.

Gigantopithecus is taller than a human and normally stands upright unlike their real-life counterparts. Its body is coated with thick brown fur and exposes a large torso in which this design greatly resembles the legendary Bigfoot

Gigantopithecus usually wanders around the frozen tundra. While this creature has a passive taming method, it will attack the player on-sight if remained too close for long. Despite its colossal size, it was very fast. It can be seen being attacked by Direwolves and Icicle Dragons in it's habitat as well and will attack them back.

Passive tame but will attack player if seen.

Advise taming from behind.

Used to open and close the drawbridge