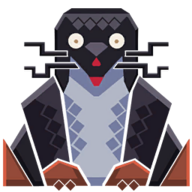 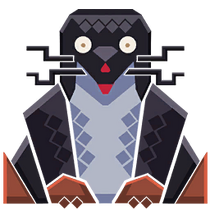 The Giant Claw Mole is one of the creatures in Pixark.

More and more adventurers have started taming Giant Claw Moles because their claws are good at breaking apart magic crystals.

The Giant Claw Mole looks like a hunched over Penguin-like figure. It has orange feet and hands and a black body (Which is similar to what some Penguins look like). On their hands they have claws which they use for digging.

Often found against or inside the walls of caves fleeing from other aggressive creatures. They will normally run from the player but are capable of fighting back.

While riding, right click will dig down in a 3x3 pattern in front of the tame.

-Digging 3x3 Stairs forward and down.

-Walking backwards while carefully removing only the top layer to mine.

-Mining large quantities of magic stone and ore faster than a wand or pick axe.