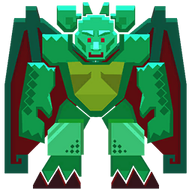 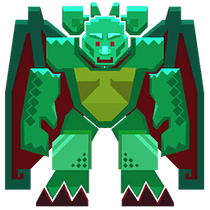 The pollo is one of the creatures in Pixark.

Gargoyles usually maintain a special stone form. Only when enemies approach do they transform into their true forms. They can use their wings to fly with great effect.

Tamed Gargoyles have learned to channel holy power with the help of humans. They can aid surrounding companions by speeding up their recovery.

At first, the gargoyle looks like a stone statue. If angered by hitting the statue, it transforms into a flying stone creature.

It stays as a stone statue until the player is close to it, where it will then break free from it's stone form and attack. Flies very slowly toward the player. Similar to the Treant, the Gargoyle will return to statue form if the player flies far enough away.

You must stay in the magic forest while taming otherwise it will run away from you.

The Gargoyle is good in battle as it can fly away swiftly and heal before returning to battle.

A Gryphon/Ghost Dragon is easily better with damage and health, but the Gargoyle's speed and healing attack makes it a fine dino to start with.

It is a very fast flying mount (as soon as it is tamed).

+ it can destroy stone structures with its melee attack.

+ Most enemy creatures are passive towards tamed Gargoyle unless provoked or unless the player dismounts.

+ By far the fastest flying mount in the game.

+ Uses little stamina while flying, even when dashing.

+ Does not require or have a saddle. (even Low level Players can tame them as long as they have a Bow and Magic Sleepy Arrow)

+ While midair, pressing dismount makes the rider stand on top of it, giving a huge advantage in knocking out most dangerous ground creatures. It is a perfect taming-assist creature due to the fastest speed that can kite the flying creatures (Ghost Dragon, Gryphon) around. Also useful during a Thunderstorm, as you will likely not fall, but instead stand on its back/head.

+ With "C", it has an AoE Regenerative ability for all Tames, including itself. Can be used when landed, and lasts 60 seconds, but be cautious as no Stamina will be regenerated during the effect. After the animation, you can move again.

- It can't Grab other Creatures in flight.

- Cannot move and attack at the same time, as the player will rubberband back a few steps each attack. It's attack is also slightly slower than most.

- Can only attack while flying

- Tamed Gargoyle's base damage reduced from 60 to 54

-Tamed Gargoyle's can transform into statue