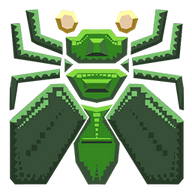 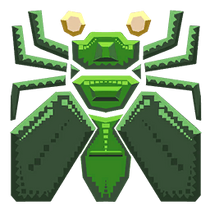 The Firefly is one of the creatures in Pixark.

This common insect has no attack ability. It seems that they're only good for making grasslands more colorful.

When tamed, these creatures can help you illuminate even the darkest of nights.

It is a very tiny creature compared to majority of Pixark animals, it has a dark green tint surrounding it along with a yellow light on the end.

Floats around harmlessly lighting up an area around it.

When ordered to attack any type of animal, it will turn around and run away, making it entirely useless for combat.

The Firefly can be picked up, turning them into a hands-free cold light. Unlike the torch or other fire-based lighting, Fireflies do not raise the temperature. While sitting on your shoulder they are good for mining and combat at night or in dark places. They are bright enough to use as a lamp. Also, items placed in the firefly's inventory weigh half as much when the firefly is mounted on the players shoulder, like other shoulder-mounted pets. This can be used to effectively allow players to carry more weight.

When unlocked the "Firefly Pillar Lamp" or "Firefly Wall Lamp" you can drop a tamed firefly near it and put it in the lamps using the radial menu "E". Captive fireflies will eventually starve to death unless the lamp is within range of a Feeding Trough.

Lamp blueprints can be found in drops and ruins.