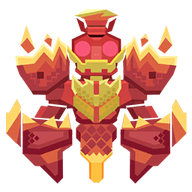 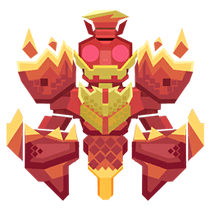 The Fire Elemental is one of the creatures in Pixark.

Wild Fire Elementals are aggressive creatures. Their fire allows them to wield frightening power, and burn their attackers.

Fire Elementals which are summoned by using Fire Elemental Summoning Stones are extremely powerful, and will burn other creatures.

Better suited to the unbearable heat lava emits, the Fire Element subspecies has developed the ability to slowly produce lava from within, leaving a lava trail in its wake (C).

The Fire Elemental looks like a giant red Genie. It is on fire and looks quite frightening.

Like many creatures, wild Fire Elementals will attack players on sight. They will deliver a devastating blow which burns them to death if unarmed or armed in an inappropriate way. Regardless to the outdated descriptions, these scorching creatures can be knocked out with magic sleepy arrows, hence tamed. Tamed Fire Elementals are mobile campfires and can cook sources of food for players, which is suitable for traveling long distances without starvation.

The fire Elemental has a punch attack and a

Once tamed, the Fire Elemental can cook Raw Meat, Raw Prime Meat, Longrass and Savoroot from inside its' inventory.