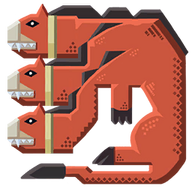 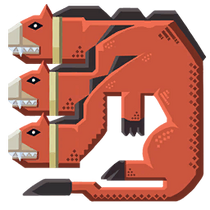 The Felhunter is one of the creatures in Pixark.

The felhunter is very aggressive to most creatures and it can breath fire, which does strong health over time damage. Be very careful around these with low health point creatures like the Pteranadon.

Magic Sleepy Arrows from a bow or crossbow to knock a Felhunter unconscious. Put Meat in its inventory while unconscious to tame.

The appearance of fellhunter is that of the dog that guards the gates of hell known as Cerberus. Felhunter has three heads and has red skin with large, clawed feet.

Can fire a breath attack with a long range as an alt fire. This attack slows, poisons and burns the target. Costs over 300 stamina to cast and has a 10-second internal cooldown before it can be recast. The alt fire also goes through walls and can be used to farm ruins from the outside extremely safely.

The Felhunter gathers additional leather and fur with its bite attack.

Felhunters are excellent base defenders, combining incredible amounts of raw HP and excellent HP regeneration with a breath attack that can fire through walls and even solid rock to kill attackers with ease. They are also one of the few creatures in game that are able to damage enemy riders directly, killing a mounted level 40 player with just 1-2 breath blasts.