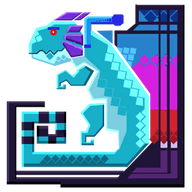 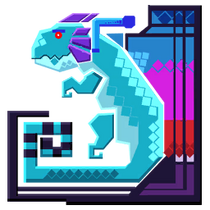 The Fairy Dragon is one of the creatures in Pixark. It can be found in the Golden Realm biome and requires a Fairy Dragon Saddle, which can be obtained at level 40 and crafted in the players inventory.

"Fairy Dragons live in magic forests. They are one of the most peaceful animals in these forests, and if attacked, will simply try to escape."

The Fairy Dragon is a passive creature and will not attack players or wild predators that go for it. It would much rather fly away and avoid all combat all together despite actually having a melee attack.

They can be found in the Golden Realm biome and are relatively common. Be careful taming these as despite this particular creature not being aggressive there are many creatures in the biome that are, namely, the T-Rex and the Argentavis. Both of which will attack you if you get too close and will more than certainly eat your tame once it has been knocked unconscious.

"Fairy Dragons are not so powerful in combat, but their Defence is strong, which can protect them and their rider from lots of damage."

The Fairy Dragon has relatively good speed, being slower than a Pteranodon but faster than an Argentavis. Using "RMB" will enable a magical shield that will block incoming magical attacks for 3 seconds. Be warned that this move drains a lot of stamina (twice that of a standard attack) and has a 4-second cooldown to avoid overuse. The Fairy Dragon can also lift players and small creatures by using "C".

Fairy Dragons are a mix of blue, dark blue, magenta, and purple in color. They have white sparkles that seem to project off of them as do most magical creatures. They are easily distinguishable in their natural biome as everything around them is a red-gold autumnal colour in contrast.

The Fairy Dragon is a passive animal and will not return attacks nor stick around long once being attacked. It's movements are random and unpredictable, once you hit a Magic Sleepy Arrow it will immediately start to flee, after a few seconds however it will calm down and even stop in place for a few moments which will allow you to continually hit it with another arrow and repeat the process.

Be careful when taming these as you can quite easily run into a path of an Argentavis which will aggro you and cause you no end of trouble should you knock the Fairy Dragon unconscious when it's following you.

The Fairy Dragon has a magical shield which can be activated with the right mouse button. This will block magical projectile attacks for 3 seconds and will use a lot of stamina so be wary! This shield also has a short cooldown of a few seconds so make sure not to miss-time your shield!

The Fairy Dragon has decent movement speed, being slower than a Pteranodon but faster than an Argentavis and high stamina, which makes it an ideal mid-level long distance mount. In addition to this it is also an ideal load bearing animal as it has a high weight capacity in comparison to previous air mounts such as the Pteranodon.

Fairy Dragons are non-aggressive, making them quite easy to trap and knock out. They also stay still for long periods of time making them an easy target for a level 40 mount.