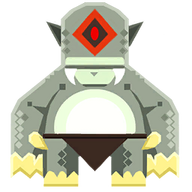 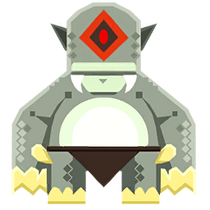 Cyclops, the progeny of Titan gods. Has only one eye.

The Cyclops is one of the creatures in Pixark. It can be found in and around the Doom Lands.

Be careful of Cyclopses, they are quite aggressive. Try to avoid coming face-to-face with these fearsome creatures.

Note:This is the in-game description, but Cyclops is not actually tameable
Taming a cyclops is difficult but worth it. Their giant clubs make them a force to be reckoned with in combat. Their great strength allows them to lift most animals.

The Cyclops subspecies (The Ogre) is extremely powerful while also intelligent enough to be tamed into a respectable warrior which will fight alongside explorers. Unlike many other creatures the Ogre has the ability to grapple small creatures and explorers (Press C).

Attacks players on sight. Will fight with the Minotaur and Fire Elemental.

The Cyclops can not be tamed, however, the second variation: "Cyclops (Doom Lands)" can be tamed.

They can often be seen fighting against Minotaurs.

There also exists a variant named Cyclops (Doomlands), easily differentiated by its greener tint and large, metallic helmet. Cyclops (Doomlands) can be tamed by knocking it down with magic torpidity-inflicting attacks, and putting meat in its inventory.