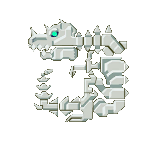 The Bone Rex is one of the creatures in Pixark.

"The largest Bone Tyrannosaurus. They were up to 12.3 meters in length, up to 3.66 meters tall at the hips, and 9 tons in weight." Source: In-game handbook

Wild Rexes are an apex predator, and known as the king of the dinosaurs. They live in the outer ring of the golden realm. If you hear its roar, you'd better run.

A tamed Rex is the strongest dinosaur in the world. Don't hesitate to ride it and fight with it if you've tamed one.

For passive tames, there is a long wait between the first and second feedings as the creature eats, after which it follows the feeding intervals listed. These feeding intervals are estimates - the actual interval will vary per-creature based on random chance.
Error: No taming-data for "Bone Rex" found. If the current page is not a creature-page, write the wanted creature as first parameter. Use only the common name, found on the creature's dossier.

With their high torpidity, a Bone Rex can easily take several hundred Sleepy Arrows, so preparation is crucial if one wishes to avoid a long and arduous battle. It is advisable to use Sleepy Darts with a Longneck Rifle, as this requires roughly 8 times fewer shots than using sleepy arrows, giving the player a considerably shorter knockout time and more control of the situation as a whole.

Some players will find it worthwhile to build a taming pen to trap the T. Rex, but it is worth noting that due to their erratically aggressive behavior, it is often very difficult to coax a T. Rex into the enclosure without taking heavy sustained damage in order to keep its focus. They will usually target the closest living creature, sometimes seeming to pick a target at random from further away if it isn't actively engaged in combat, which can result in unpredictable behavior and present a challenge for a player who wishes to draw it to a certain area.

Roaring sound is somehow reminiscent of the Indominus Rex.