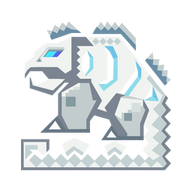 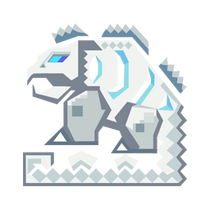 The Bone Megarock Dragon is one of the creatures in Pixark.

For passive tames, there is a long wait between the first and second feedings as the creature eats, after which it follows the feeding intervals listed. These feeding intervals are estimates - the actual interval will vary per-creature based on random chance.
Error: No taming-data for "Bone Megarock Dragon" found. If the current page is not a creature-page, write the wanted creature as first parameter. Use only the common name, found on the creature's dossier.

With their high torpidity, a Bone Megarock Dragon can easily take several hundred Magic Tranquilizer Dart, so preparation is crucial if one wishes to avoid a long and arduous battle. It is advisable to use Magic Ballista Bolt with a Ballista Turret, as this gives the player a considerably shorter knockout time and more control of the situation as a whole.