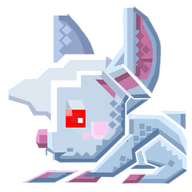 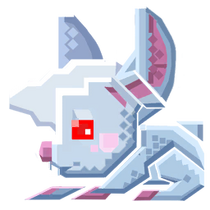 Big-Ear Rabbit are huge and docile. They grow very fast.

The Big-Ear Rabbit is one of the creatures in Pixark.

Wild Big-Ear Rabbits are common, gentle creatures. They are often hunted for their prized, large ears.

Tamed Big-Ear Rabbits are very clever, and make an ideal pet. You can even put it on your head to keep warm.

Passive, will attempt to run away when provoked.

The Big-Ear Rabbit is useful for early game warmth. It can add to a player's warmth by being put on the player's head (or on top of your hat) and is carried around by "clicking" the "Use" key. To remove the rabbit, "doubleclick" the "Access Other's Inventory" key.