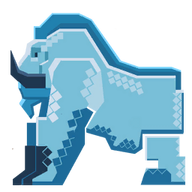 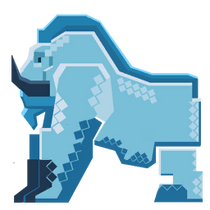 The Behemoth is one of the creatures in Pixark. Can be found in the ice ruins (Ice castles) on the lowest floor (three floors in total). There is often an invisible trap through the front door to him, place a few blocks over that floor area to avoid it or shoot at it from a distance with gun or magic. Earth magic is most effective, water magic does nothing and dark magic nothing as it is inside.

These are mysterious and terrible creatures. Few people have seen them with their own eyes. Their true nature is unknown.

The Behemoth looks like a giant gorilla. It's body is covered with white fur, with a blue back that resembles its spine. It has also blue coloring on both feet and hands. it has 3 giant claws on every hands and two giant fangs.

It has chains with broken pieces over its shoulders.

In second stage the chain will disappear, and it's body will turn from blue to red

The Behemoth can not be tamed.

The Behemoth has a powerful melee attack dealing more than 700 damage.

Stage I: Normal Stage. Gains about 50% damage reduction comparing to Ice Fairy Boss from level 3. Mostly Melee damage, can be easily avoided by staying on the stairs and using wind magic essence to attack without risk of being hit.

Stage III: When reaching about 1/6 health, Behemoth will release powerful area attack that can reach targets behind walls/floor. Require confirmation on what attack this is.