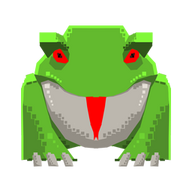 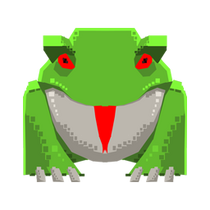 Beelzebufo lived in the late Cretaceous period. They had teeth and armor.

The Beelzebufo is one of the creatures in Pixark.

Wild beelzebufos are solitary creatures that don't often interact with other animals. Don't underestimate them, though - their tongues present great power.

Beelzebufos have the strongest jump in all of Pix ARK[sic]. Additionally, they are good at swimming, and make for an effective underwater mount.

==Combat== It has a lick attack that does torpor damage.

Travel: One of the uses of this large frog is traveling the map, as it has a very high and very far jump allowing for quick and safe travel