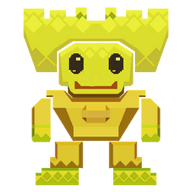 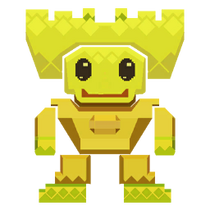 The Baby Treant is one of the creatures in Pixark.

Baby Treants do NOT spawn wild. Instead, it has a chance to spawn once a player kills a Treant. This is very rare, however, so players looking for a Baby Treant should expect to kill several Treants before finding a Baby Treant.
Note: Non-magical Sleepy Arrows fired from a bow or crossbow deliver extra torpor over time for 5 seconds after impact. Only two instances of this effect can be in effect at once - a third arrow hit before the effect has fully resolved will result in potential torpor being wasted. For maximum efficiency, time your shots so that they land 5 seconds apart. The numbers given here are assuming you do so.