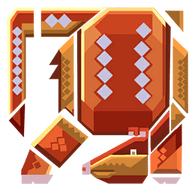 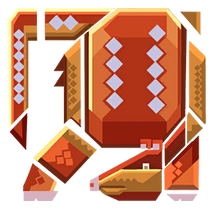 The Armadillo is one of the creatures in Pixark.

Armadillos live primarily near lava, which they use as a natural defense. They can be mostly found within caves near the Doom Lands. Though they have few natural predators, humans hunt them for their shells.

Usually people tame these to keep warm, but they do occasionally scald those nearby. Ride on them to move through lava.

The Armadillo has a red shell with a pink stripe and lighter pink spots. The body is a pink fleshy color and often have red particle effects. They glow inside caves making them easy to spot. 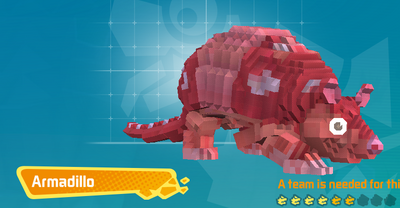 They will often attack weaker creatures. When close to death, they will curl up in a ball as a last resort, making them invulnerable to most incoming attacks.

Its shells can be used to craft the Lava Armor set.

Works as a mobile smelter. However the item (i.e Iron) has to be clicked twice in succession to craft a single ingot making it a tedious affair to do so.

Though the Armadillo is an herbivore, it is able to harvest items from meat blocks. Using Meat will have no effect on its Hunger. When breeding Armadillos will lay eggs even though they are a mammal.