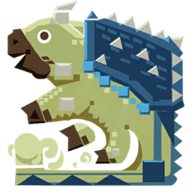 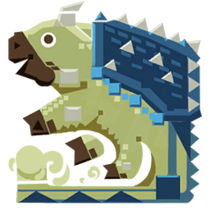 Ankylo. Its armor actually is hardened skin which has strong defense capabilities. It also has a large tail mallet. Its tail is very weak.

The Ankylo is one of the creatures in Pixark.

A wild Ankylo is a tough opponent. Its thick shell, strong tail, firm head, and spikes make it a threat to most creatures.

A trained Ankylo helps its owner collect lots of minerals by crushing up the rocks with its extremely firm head.

The Ankylo has quite an interesting appearance. It has a blue shell but a yellow-ish colored body. It has spikes on its head, shell, and the end of its tail. It can sometimes be a little hard to spot if you look at it sideways because it spawns in a desert and it has a yellow-ish color and the only thing that might give it away would be the blue shell.

Its shell can be used to craft the Rebound Damage Shield.

With its regular attack, a tamed Ankylo can mine up to 12 blocks at one time in a 2x3x2 pattern. Its mining power is equivalent to that of the Copper Pickaxe.